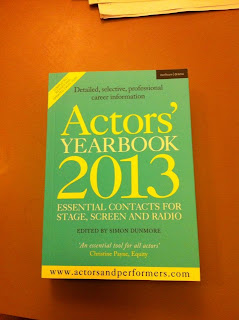 Do check it out if you get the chance.

A couple of months ago I worked on a film called The Plotters by the Guerrier Brothers for the Virgin Media Shorts Competition. And let me tell you, my running was exceptional.

Well, I’ve just heard the fantastic news that the film has been shortlisted, and will be shown in cinemas around the UK for the next year. Which is particularly good, because a) the film is brilliant and b) Tom and Simon are both top blokes who deserve wider exposure.

“But Piers,” I hear you cry “I rarely visit the cinema these days due to the expense! Also, how would I know when it was on?”

Never fear, my made-up friend! If you can’t wait until then, you can watch The Plotters online.

If you particularly like it, you can even vote for it on the Virgin Media Shorts facebook page or by tweeting “The Plotters #VMShortsVote” on your Twitter account, which will help determine the runner-up prize.

Not that they’re not going to win the grand prize anyway, but, well, it couldn’t hurt now, could it?

Other shortlisted films are available. 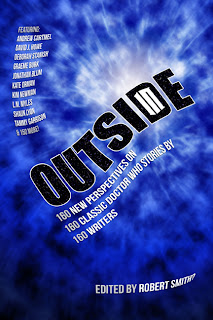 I’ve got a piece published in Outside In, a new book edited by Robert Smith?. This is actually going to be the first time something I’ve written’s been in a book, so I’m rather chuffed about this.

(Yes, Robert Smith? is indeed he of the standard SIZR model of Zombie Infection fame.)

Outside In aims to give new perspectives on all of the classic stories, each by a different writer. And in all sorts of different ways. To give you an idea, here’s a flavour from the press release: “I’ve had mock-angry letters to the BBC, transcripts of council meetings, even a recipe. There are flow charts, maps, TV scripts, timelines, Shakespearean plays… and, of course, intensely passionate and vocal opinions about the entirety of Doctor Who.”

Pre-orders should be available from the end of September. More details to follow!

For those of you who don’t, it’s a way of staying in touch while on the move. Bite-sized chunks of content, 140 characters per tweet.

Originally, there was no way to “call out” to another user, and your messages would just be broadcast to everyone following you. If you wanted to speak to someone privately, you’d send a Direct Message (DM) – so if you tweet “D piersb Hello Piers!” then only you and I will be able to see that message.

What a DM doesn’t allow, of course, is for you to speak about me to everyone in a way that identifies me as the person in the conversation in a unique way. People soon picked up on this, though, and invented a solution: the @ tag (pronounced at tag).

An @ tag is basically your Twitter username with an ampersat in front of it. Thus, @piersb is my @ tag. So if I was speaking about you, I’d use your @ tag, naming you as a unique individual (because each Twitter username is unique), and meaning that everyone following my twitterstream would know who I was talking about.

@ tags caught on because they’re unique identifiers. Soon they became so useful that Twitter upgraded its clients in order to pull out your @ tags into a mention stream. So when anyone is speaking about or to you in public, you’d know about it and be able to join in the conversation.

Now, the problem with this is if I want to talk about you without it necessarily popping up in your mention stream. This happens a lot on Twitter with people working in TV. If you want to say that my show is terrible, then you might say “I hate @piersb’s writing! It sucks and he is the suckinator!” The @ tag uniquely identifies me, but unfortunately also brings it to my attention by dropping it straight into my mention stream.

It’s the equivalent of every pub conversation about you anywhere in the world suddenly being piped into your living room through a giant set of speakers. Uncomfortable, and not very nice.

So I’d like to propose a solution. The & tag (pronounced and tag). It’s exactly the same as an @ tag – it uniquely identifies you in the conversation, but doesn’t automatically announce the fact that you’re being talked about. Because you’re uniquely identified, anyone who wants to go and check out your twitterstream can, but without you being automatically notified of anyone talking about you.

The @ tag keeps its original purpose of alerting you to a conversation involving you, while the & tag means that people can speak about you behind your back. (Obviously, if you want to hear what people are saying about you, you’d simply search on your & tag – but you wouldn’t have to be told about it if you didn’t want to.)

So if you want to talk about me on Twitter, I’ll be there at &piersb.

I’m not going to Edinburgh this year, but several friends are. You should go and see them. They’re very good.

Elise Harris tells you about the things under your feet. Some of what she tells you may even be true.

Clare Goodall brings the past to life using Harps, Lyres and other ancient instruments including the Battle Shawm (!). Directed by m’brother Rafe Beckley and produced by Kelly Golding.

Well look’ee here! It’s only a preview of Mel’s Persona!

Why not watch the trailer before putting on a DVD in order to get the full cinema experience? You may also want to watch ten minutes of adverts, and pay well over the odds for some soda and popcorn.

The new season of Persona starts on iPhones and Android handsets next Monday, 6 August. 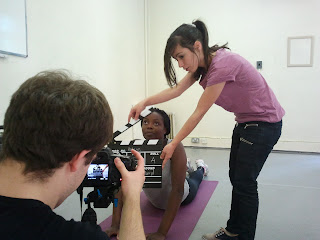 Some people (possibly the same as those that argue that Doctor Who isn’t Doctor Who’s Name or that “they” isn’t a perfectly good singular pronoun that’s been in use for centuries) have occasionally been known to argue that it’s not possible to give 110%.

Of course it is.

Let’s take a look at George Osborne, who I’m told recently said on ITN news that he was “110% focussed on the economy”.

Let’s assume that he was previously spending, oh, ten hours a week focussing on the economy. (This may be generous, given the complete rat’s arse he’s making of it.)

Anyway, all he has to do is spend an extra hour thinking about it. Bingo, 110% focussed on the economy.